We had several new arrivals today, that I wasn’t quite ready for.  I ordered some Magpie Call ducks from Faith Valley Waterfowl  and they were scheduled to arrive tomorrow.  The post office isn’t known for their speedy deliveries, so I didn’t have ‘running to the post office’ on my list of things to do today.  I got a call at 11:00 saying that my ducks had arrived!  So, I ran up to my local post office – the location where I have picked up my ducks in the past.  The look on the postmaster’s face was priceless when I told him that I was there to pick my ducks up 🙂  He very nicely informed me that he did not have any ducks in the back.  I called the 800 number for the Post Office and gave them the tracking number and they said that there were 3 locations that they could be at – what???  Shouldn’t the tracking number tell them exactly where the package was!  Luckily, they were at the location I called first.  So, we headed in the opposite direction and picked up our new ducks.

I love this color!

Here you can see just how little the call ducks are.  This little gal is 6 weeks old and will get a little bigger, but not a lot.  It was nice they were able to get out of the box a day early!

here is Symphony post shearing.  I didn’t think they were due until next week, but when I went out to do evening chores, she had a lamb with her! 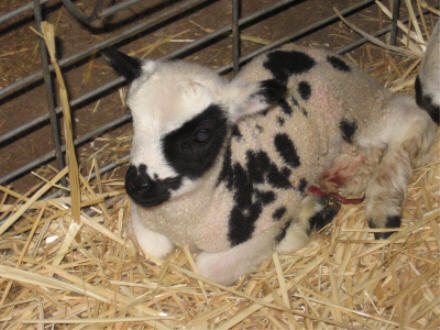 Such a good mama!  He was dry and had a full belly.

She is very protective!  He has a beautiful fleece.  It is silly how excited my son and I were to have a new lamb after just having 40 of the little boogers!  They sure are cute 🙂