aka Magoo, our Llama.

I was surprised to see him standing so close to Carrera with a pleasant look on his face.  I soon realized, it was her standing next to him.

She pushed her luck when she turned her head towards him…there’s the look I am familiar with.

Then she really pushed her luck when she looked at him with a look of ‘what is your problem?’ 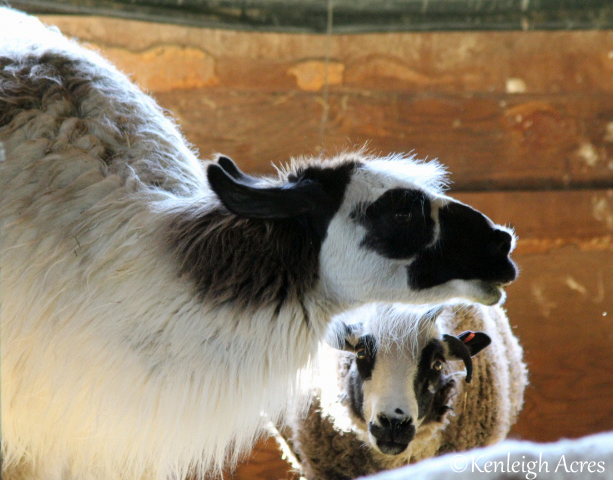 He tried getting her to move with the ‘intimidating’ head down, neck thrust.  She wasn’t impressed 🙂

In fact, she decided to give him a little bit of lip back!

Magoo really does like his sheep, but he also has a big personal space bubble and prefers they stay OUT of it!  He teaches the lambs early on that he is NOT a jungle gym and there is no way they are to climb on him.  It looks like Carrera missed the memo on giving Magoo his space.

Here is a little video clip of Magoo doing his job.  Luckily, it was just a trash can that blew out of a trailer on the road that he was concerned about.  He alarm calls at the very beginning and towards the end, such an interesting noise.