Start your year off right…

and order a Jacob Sheep calendar!

The artwork was done by JSBA member, Julie Kuroki, and it is all amazing! 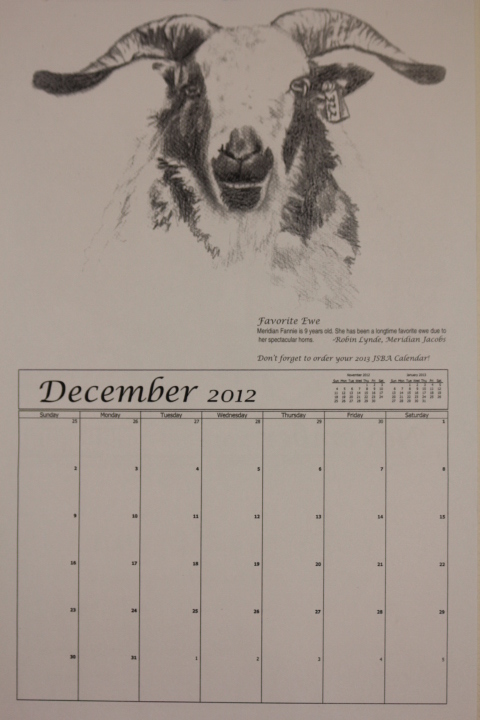 My favorites are June and August.  They feature animals from our farm!!!  Julie was looking for pictures in two categories and asked if I could help.  She wanted a picture with a herding dog and jacob sheep and another picture with a group of rams.  I sent the pictures off and couldn’t wait to see what she came up with.  The bonus to sending pictures in, is you got the original artwork back!!!

The boys, Kenleigh’s Wrangler and Kenleigh’s Reno.  Now to frame them and rearrange our walls for all of the artwork we have been blessed with, in the last couple of weeks.

You can order a calendar by sending an e-mail to jsbaoffice@yahoo.com  They are $15 + $7.90 for shipping.

Aimee is a very special girl with a special story…

She arrived here in 2005 in a round about way.  A sheep buyer that we know called wanting to know if I wanted 3 Jacob sheep.  He had a pretty good idea of what a ‘true’ Jacob looked like, so I took a leap of faith and told him yes.  I went to his place and picked up 2 ewes and a wether.  All were lilacs and I had no idea where they originally came from.

We didn’t have them for very long when a couple of gentleman came looking for some sheep and really liked her and her friend, Ellie.  They were a wonderful home, but got in a little over their heads and called in the summer of 2006 wanting to know if we would buy their whole flock.  We had just sold all of our commercial sheep and were looking for more Jacobs and they had some very nice sheep, so the girls came back.

Unfortunately, Aimee had a very bad experience with a shearer while she was gone.  He sheared one of her teats off.  When she lambed a few months later, she got gangrene mastitis and lost that half of her udder.  Not only did she lose that half of her udder, but she had a major infection that ran down the inside of her leg.  The owners nursed her through it and she continued to take care of her lamb through the ordeal.

She now has half an udder and a scar that runs from inside her leg all the way down to her foot – you can see part of it here.

I was a little hesitant to breed her with only half an udder, but couldn’t sell her after she had been through so much. 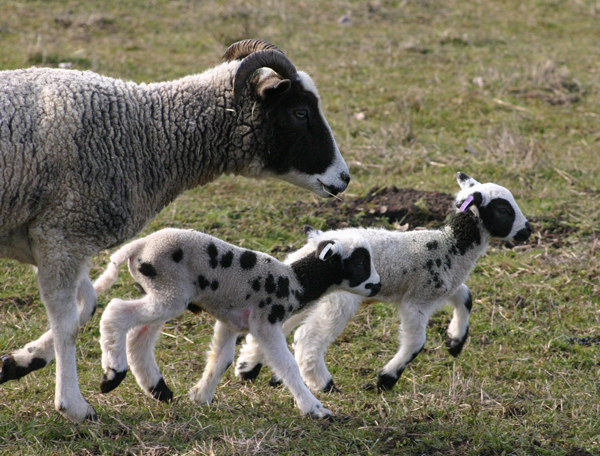 She had a beautiful set of twins and didn’t need any help from me.  Not only did her lambs get enough to eat, but they grew at the same rate as the rest of the lambs!

She is a very devoted mother and loves her babies.

Since that first set of twins, she has thrown twins every year since.  They always grow well and she never complains.  The last couple of years we have worked out an arrangement where she comes into a smaller pen at night, always with her lambs right behind her, and I give her some extra food.

Here she is with her lambs at weaning time this year.

I may not know her background, but she has thrown some exceptional lambs.  Here are just a few… 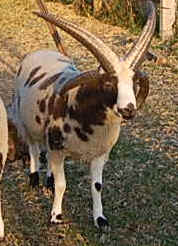 Royal – a handsome 4-horn ram that went to California 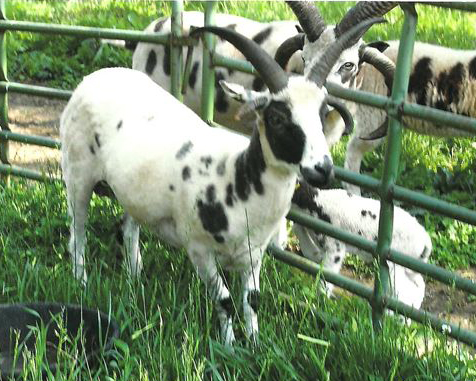 and Breeze – a 4-horn ewe that is in Indiana.  The horns on this girl are incredible.  She is pictured here as a yearling and the lamb on the other side of the panel is hers.  She is also a GREAT mother. 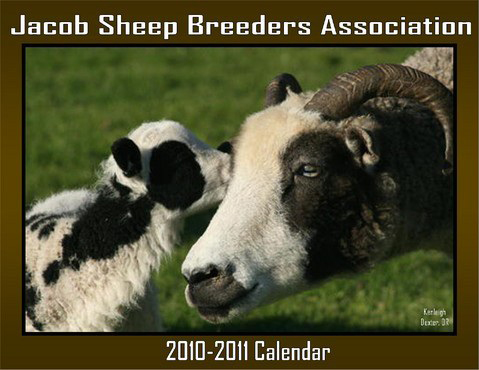 She is a wonderful representative of the breed and I was so happy to see that she made the cover of the Jacob Sheep Breeder’s Association Calendar!!!

I love this picture!  The look on her face is so serene and truly captures her spirit.

Calendars can be pre-ordered until the 15th of July – you receive a discount and free shipping if pre-ordered.  Jacobs from all across the country are represented in this beautiful calendar and all of the proceeds go to support the association!