I have given a lot of thought to this year’s breeding groups as well as where I was going to put everyone.  I learned several years ago that having empty pastures in between the breeding groups is very important.  We had a ram destroy several fences trying to breed EVERY ewe on the place.  He left us early that year…

We have 4 breeding groups this year, which includes 30 ewes – 9 first timers 🙂

Our first group is:

Kenleigh’s Douglas with Maverick Marloe, Red Wing Frodo, Windy Acres Kate Lynn, Kenleigh’s Liberty, and Windy Acres Darling.  As stated in a previous post they went together a little early 🙂  Douglas has behaved like a gentleman since!

The second group is: 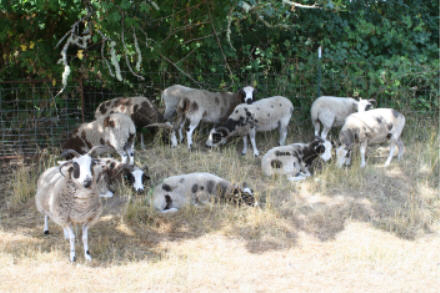 Kenleigh’s Wrangler with Windy Acres Amber, Kenleigh’s Legacy, Zettle’s Hattie, Zettle’s Harley, Kenleigh’s Chevelle, Kenleigh’s Celeste, bide a wee Tess, Painted Rock Jeslyn, Meridian Shasta, and bide a wee Dolly Doll.  I’m not sure how it happened, but this group includes all of the overly friendly (climb on top of me during feedng time) sheep.  This pasture also had one of our llamas in it, but Wrangler saw him as a threat and was going to take him out, so we had to move him.  We haven’t had this happen before.

Our third group is:

Magic Moon Junior with Craft’s Miah, Rolling Hills Elsie, Rolling Hills Veronica, Windy Acres Darby, Windy Acres Dusty, Brenalan Amelia, Meridian Bella, Kenleigh’s Aimee, and Sagebrush Sera.  It’s hard to see in the picture, but Junior is feeling very dejected.  He was originally in the pasture next to the barn.  He made quick work of ramming through the gate to the next pasture which shares a fence line with Wrangler and his girls.  One of Wrangler’s girls was in standing heat and Junior felt like it was his duty to breed her.  We quickly moved him to the pasture with the electric fence before he was able to crash through the fence.  He was very upset and is still pouting in the corner – poor guy!

And the final group is:

Kenleigh’s Pilot with Kenleigh’s Eclipse, Kenleigh’s Holly, Kenleigh’s Azera, Kenleigh’s Ellie, Rolling Hills Dee Dee, and Kenleigh’s Sahara.  Pilot is the only one that behaved himself this year!  He was easy to catch and halter and he walked to his pasture like a pro.