Posted by kenleighacres on October 28, 2008
Posted in: whippet. 2 Comments

I took Paisley into the vet on Friday for a recheck and x-ray.  Unfortunately, the pin had caused a hole in her skin and was causing a lot of discomfort.  The vet decided to cut a little bit of the excess pin off.  Good news is that the x-ray looked really good.  The bad news was that Friday night was miserable, I got about 4 hours of sleep due to Paisley’s constant whining.  On Saturday I noticed that she had a big bulge on the front of her shoulder.  It was hard and I had no idea what it was, but figured it had to be why she was in pain.  I called the vet and unfortunately the vet that did the surgery was out of town for the weekend.  The on-call vet is pregnant, so she couldn’t do an x-ray to figure out what the problem was.  So, we decided to wait until Monday morning.  In the meantime she prescribed some more pain medicine and antibiotics.  For somebody with a weak stomach, it is pretty nasty looking 😉  This morning I took her back to the vet and we did another x-ray.  The bulge is the pin causing a lot of irritation to the surrounding tissue and is causing some calcification.  He wanted to cut off a little bit more of the pin, but he was going to have to sedate her for it.  So, I left her there and came back a couple hours later.  The poor girl had to be sedated for nothing because the pin is in the bone in such a way that he couldn’t cut anymore off without doing more damage.  The poor girl is going to have this weeping bubble until the pin is removed in another 4 weeks.  I guess I am going to have to get a stronger stomach!  They left her bandage off and she seems to be happier.  Her skin is a mess from the tape, but should heal quickly. 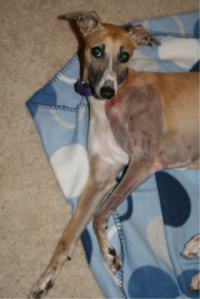 I’m happy to see that she is resting comfortably.

We appreciate all of the well wishes!

2 comments on “A Paisley update…”