Abbey has become a special girl.

She was born with a lot of flash and she has the personality to match.  Unfortunately, she spent too much time baaaaing and carrying on and not nursing like she should have.  For some reason she couldn’t figure it out???  Now to be fair, her mom is a little different, she only has half an udder.  She had a terrible thing happen to her by a shearer before she came to live here – you can read her whole story here.  Abbey is determined to nurse on the side that doesn’t have anything to nurse on.  I tried helping but Aimee wasn’t very cooperative.  All of Aimee’s twins in the past have figured out sharing the one side, so I left them alone and hoped they would figure it out.  Unfortunately that didn’t happen.  Early the next morning I went out to check on everyone and little Abbey was screaming her head off and after an inspection of her tummy, I could tell that she still hadn’t nursed!  I was very thankful that she was still vigorous and she quickly took the bottle I offered.  The poor girl used up all of her fat reserves and I noticed her having a hard time maintaining her body temperature, so she got a jacket.

I’m not a big fan of bottle lambs…there really isn’t anything like mom, but it is nice that she still has a mom and sister to hang out with.  She has moments of confusion though…

do I stay with them…

or do I come to you? 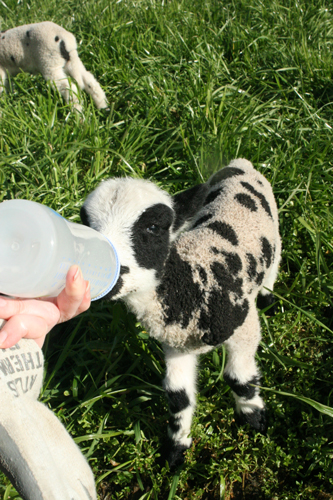 In the end the bottle wins 🙂 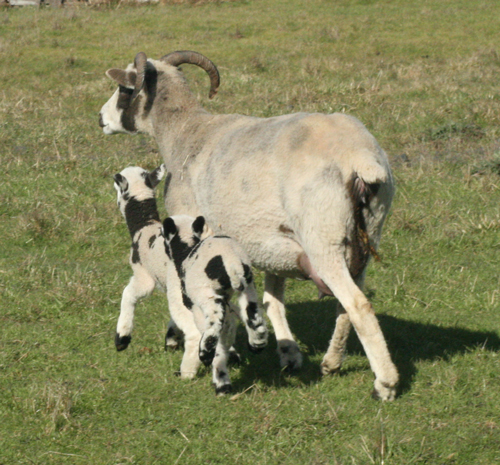 She is doing really well and doesn’t need her jacket anymore.  I love seeing her kicking up her heels out in the pasture!

It is a far shot, but I am still hoping she may catch on from her sister and figure it out 😉  Until then, I will continue my late night and early morning feedings!